Research from Aluma Insights finds that, among adult online TV viewers (OTVs), annual household income (AHI) is a strong determinant of how much time they spend watching streaming video each week. For example, adult OTVs living in households with an AHI less than $30,000 spend 71% more time each week watching streaming video on TV than households with AHIs of $100,000 or more. 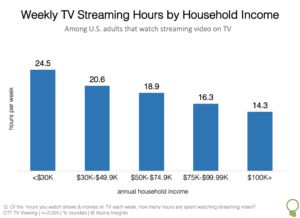 “Some may argue this correlation is due more to the age of the adult OTV than with household income, but this is not the case,” said Michael Greeson, founder and principal analyst at Aluma. Aluma’s research finds that the amount of time OTVs spend watching streaming video is largely consistent among adults under the age of 45 (~20 hours/week) but declines significantly beyond age 55 (~15 hours/week).

“Those that viewed streaming video as children, teenagers, or young adults have brought their affinity for streaming video into middle age,” Greeson added. Today’s 45-year-old watches on average almost as much online TV video as the average 18-year-old (20.1 vs. 19.8 hours/week, respectively).

Notably, pay-TV subscriptions increase with age, from 47% of OTVs with household incomes less than $30K, to 76% among those making $100K or more. The concomitance of these two facts is not unanticipated.

The data featured herein is from Aluma’s survey of 2,025 U.S. adults that watch streaming video on television.